After I discussed Gucci outlet bags, why not have a little fashion history?

The Gucci house’s history is bloody. There was even a book published in 2009 entitled Gucci Wars: How I Survived Murder and Intrigue at the Heart of the World’s Fashion House.

Quite a mouthful, huh?

Gold-tone hardware of a “Gucci Plus” bag

The author of the book was Jenny Gucci, married to Paolo Gucci, one of the founder’s grandson Guccio Gucci. While they eventually got divorced and in a long, ugly tale, she recounted the origins of the ‘Gucci Plus’.


According to her, even if the Gucci brand was selling really well in the 1970, he could see the opportunities for starting a second somewhat cheaper line that would be more accessible (so accessible to the point that he wanted Gucci to be sold in grocery stores!).

He wanted to call it ‘Gucci Plus’ and worked day and night on the business plan and designs. Time and again, he would present his ideas in the boardroom only to have them thrown out.

Paolo’s plan was to make the Gucci brand more accessible, especially to younger customers. His argument was by using other factories outside of Florence, they can still achieve the same level of quality and save a fortune in the process.

‘Gucci Plus’ was Paolo Gucci’s dream as it would be his own label. It wasn’t really that he wanted to break away from the family to get it. If his family had agreed, he would have been happy to work on the new line within the family business. But he was blocked at every turn.

Later, of course, his idea was proved right. Armani (Emporio Armani) and Valentino (Valentino Garavani) both came out with successful second lines.

Without permission from the board, Paolo continued to work on ‘Gucci Plus’. He created the designs, approached suppliers and looked at manufacturing costs in other countries.

Obviously, word got out and, for once, Rodolfo and Aldo were in agreement – Paolo would have to be stopped.

Paolo was sued for copyright infringement. But in 1987, he eventually won a court case that allowed him to use the name “GUCCI” in his products.

However, one of the stipulations stated that these should be trademarked differently so as to differentiate them from the main Gucci line. These bags were produced in Mexico, as well as in Haiti.

Gucci, But Not a Gucci

For the record, Gucci DOES NOT recognize “Gucci Plus” as a legitimate Gucci bag. So save yourself from embarrassment and try not to approach any stores for repair, cleaning or restoration.

Here is an example of a vintage “Gucci Plus” crossbody bag.

A “Gucci Plus” crossbody messenger bag

Close-up of the monogram canvas of a “Gucci Plus” bag

Here we have another example of a ‘Gucci Plus’ bag.

A “Gucci Plus” monogram tote bag

Bottom of a “Gucci Plus” monogram bag

Details of the gold “Gucci Plus” logo

Trapezoid leather tag marked with “GUCCI Plus” MADE IN ITALY

A gold-tone “Gucci Plus” zipper pull

But Main Line Gucci also has “Gucci Plus”?!

Yes, you read that right!

Not to make matters more confusing but the Gucci that we love (thus the reason why you are here) had, at one point, also used “Gucci Plus”. Personally, I think they could have done without the name, of all the names in the world, but it has been done.

But Gucci eventually dropped the name ‘Gucci Plus’ (thank goodness).

Now, if you browse Gucci.com, these monogram coated canvas bag is now called “GG supreme” fabric. It’s still the same PVC-coated fabric that we love that is durable and weather-resistant.

To add a little clarification the mix, the ‘Gucci Plus fabric’ should not be confused with another coated material, which is called “Gucci Crystal”.

The “Gucci Crystal” has the standard monogram coated with PVC. Compare the example below with the “Gucci Plus fabric” above to see what I mean:

Hopefully all these history and details made you understand “Gucci Plus” better.

Next, and my personal favorite, is how to spot fake vs. real Gucci bags by comparing the details of the two. Let us start with the Gucci Abbey bag, shall we? 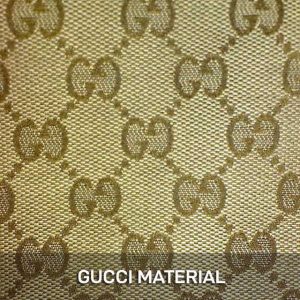