After our real vs. fake Gucci bag comparison for Gucci Abbey Messenger bag, we look at another case study. This is an interesting one. The Gucci Abbey has been released about 10 years ago, while the bag we’ll discuss here is more recent.

The Gucci Soho Disco bag is a sure hit. First released in 2012, the style is still being sold by Gucci. Due to its massive popularity, the market is flooded by fakes.

And by fakes, I mean even the super fakes! For the untrained eye, this is not easy to spot.

So, I highly suggest availing Bagaholic 101’s Gucci bag authentication service. Not all fakes are created equal. For a minimal US$ 5, you are sure to receive expert opinion on that Gucci Soho Disco bag you are longing for!

Let’s start with our comparison!

The bag on the left is an authentic Gucci Soho Disco bag, with the fake on the right. If you look at the GG interlocking logo, they appear to be the same.

However, if you look closely, you will see the inconsistency of the GG interlocking logo. The points where the two G meets look shallow, and the stroke of the inverted G almost has no curve at all.

If you look at the strap detail, you will see the clumsily done edging of the leather. Zooming at the photo, the jagged edging looked more stark with the light-colored leather.

The hardware looked extremely faded on the fake bag, considering that it is a newer style.

With the picture of the tassel below, you can see a lot of red flags on the fake one. Similar to the strap buckle above, the one below has faded hardware instead of the gold-tone in an authentic Gucci Soho Disco bag.

The stitching and edging on the real bag were well-made, while you can see the bad edging job and the overlapping leather of the fake bag. The tassels also looked wrinkly, like a crepe paper quality to it.

If you compare the black Gucci tags on both bags, you will see the difference in the font of the numbers. The font of the “CCI” in GUCCI is not consistent with an authentic Gucci. Even how the QR codes look like can help with the assessment.

The leather tag of the fake Gucci Soho Disco bag doesn’t look as good as the one from the fake Gucci Abbey Messenger bag. The embossing is off on all accounts.

If you flip the leather tag, you will also see that the font is not consistent with serial number font of contemporary Gucci bags. Both bags have the serial 308364 (which, is the style number for a Gucci Soho Disco bag), with their complete serial as “308364 498879” for the authentic and “308364 9991” for the fake bag.

This case study comparison is an excellent guide if you were to decide in buying Gucci Soho Disco bag purses on Ebay.

Ready for another bag? Then proceed with this guide comparing a fake and authentic, and the ever-popular Gucci Dionysus bag.

(Still unsure? Then you may try BAGAHOLIC 101’s authentication service below — QUICK AND EASY!) 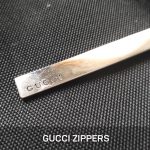 A flowery Monday to all of you! #LV #louisvuitton

A purse with some "Fringe" benefits 😉 #burberr