So after that introduction, are you ready to start your quest in buying Gucci purses on Ebay? Again, if you are not confident and losing out in a bidding war, I suggest you send the photos/link to us so we can authenticate it for you instead.

Anyway, let us start with the easiest one: the Gucci bag material.

Much has been written online about the material that Gucci uses. Frankly, of all the sections in this guide, this one did not need an in depth elaboration if you were to look at photos alone.

The material is something you need to touch to feel the difference. For the purposes of brevity of discussion, I will be mostly focusing on the monogram ones and some non-leather Gucci materials (as these are more readily available bags online). 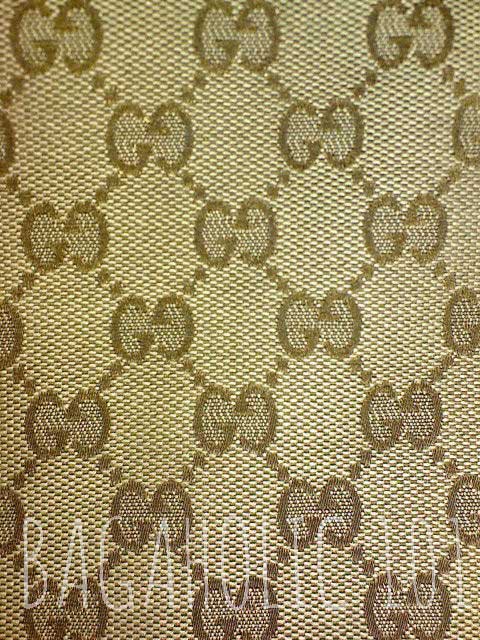 For instance, the photo below is from two Gucci Abbey Messenger bags ( a separate post for this case study exists here). From the photo alone, it is almost near impossible to tell the difference between a real and fake GG monogram canvas.

But if you look closely, you will notice that the alternating weave of fabric (the minuscule rectangles) are more defined in the real canvas. They look like bathroom tiles. For the fake one, the weave seems to blur around the edges.

Another thing you have to look for is the interlocking GG. In the authentic Gucci canvas bag, you will see the horizontal line in the G (called a serif) is longer and more defined. You can make out both of the serif extending from the curved line of the G. But the serif going inside the G is longer, while the one outside it is shorter.

The serif on the fake monogram canvas looks a bit shorter and less defined. It even has an equilateral triangle quality to it.

Also, if you haven’t handled a lot of Gucci monogram canvas bags, they feel almost identical to touch. But as you get used to it, the authentic canvas has a “rougher”, groove-like quality to it, as if running your hand over a tapestry. You can feel the weave, to be more precise.

As for the fake one, it feels less defined, as if the weave has been flat to touch.

Through time, an authentic Gucci monogram canvas will eventually soften, becoming more pliable. But the texture of the weave still almost remains the same.

If you are stupid enough, like me, to have washed the canvas as if a normal garment, this will accelerate the softening process. Normal washing will soften the backing of the material, thus making it more pliable. (Don’t do this, I tell you. I have long since sold that bag with full disclosure of my stupidity!)

Perhaps, my most favorite Gucci material is the GG coated monogram canvas (usually known as ‘Gucci Plus fabric’, not to be confused with ‘Gucci Plus’ discussed here). It is hard-wearing and weather-resistant. Although, you might need to be careful with the leather parts and protect them.

As of this writing, I just braved a typhoon and had knowingly decided beforehand to use a $10 Gucci find from this post. It came out unscathed because I religiously clean and condition the leather parts.

Back to the material, the GG coated monogram canvas is PVC coated cotton. Yes, that is plastic sitting on top of a natural material to make it durable.

Look at the serif of the interlocking GG. Similar to the monogram canvas above, you will see the serifs are well defined, extending well on both sides.

Variations of the Gucci Monogram

The following photos will show variations of the Gucci monogram canvas, though not exhaustive.

A recurring theme among these are the consistency of the two squares between the interlocking GG, and its well-defined serifs. These three variations, however, show a different weave pattern. Unlike the tile-like detail of a standard monogram canvas, the weave looks diagonal and twill-like.

Variation of the Gucci monogram canvas

Another variation of the Gucci monogram canvas

These variations, along with the standard GG monogram canvas, are prone to wear. When you are buying Gucci purses online, you have to look for and ask detailed photos of the back (where the part usually rubs against the body) and the bottom edges where the canvas meets at the seams/the leather parts. These are portions where you see the most wear (and sometimes tear) of the Gucci canvas)

The Guccissima leather, shown below, has the Gucci monogram printed (or most correctly hotstamped extensively) throughout the material. It was first created by then-Gucci creative director in 1996.

Although not as durable as the coated canvas, the Gucci Guccissima leather is durable. But beware of color transfer on light colored ones!

As you can see above, the details have to be more precise on this material. Instead of the almost blurry two squares in between the interlocking GG of the canvas ones, the squares are more precise with this. Similar to the other examples above, the serifs should be well-defined (longer inside, shorter outside).

Next is the material that is having quite a resurgence every once in a while. As a primer for vintage Gucci bag authentication (a separate post here), a lot of vintage Gucci handbags (such as the one below from the Gucci Accessory Collection) is similar to a coated monogram canvas discussed above.

This line first came out in the late 1970s and early 1980s, and was popular for travel bags, crossbody bags and smaller items.

As you can see, these older bags have a darker shading inside the interlocking GG. Also, if you compare closely, the letter G looks slightly elongated than the coated monogram canvas.

We have two variations of this: one in brown, and the other in navy.

From time to time, you might see a vintage Gucci bag with a monogram like this pop up on Ebay.

Also considered a vintage material, this monogram print is smaller (about 1/3 of a normal GG monogram print). There is also a single square between the interlocking GG, almost looking like a circular dot. This is fine and Gucci has, on one point, made a line of bags with this type of monogram.

Next, not only Grace Kelly has inspired a bag to be named after her (see Hermès Kelly bag). She also has links to the Gucci brand through the Gucci flora print. It was created upon a personal request by the Princess of Monaco in 1966. After 40 years, Frida Giannini’s S/S 2006 collection was an homage to the original Flora pattern.

A personal favorite of mine, after the GG coated monogram canvas, is the nylon canvas. Equally hard-wearing and weather resistant, I rarely see fake ones bother with this type of material (*hint, hint!*). Some sellers even list this as microfiber nylon canvas. It is finely woven and usually comes in neutral shades of black, brown and white.

Bags of this material usually have silver hardware used with it (I have yet to see one with a gold-tone hardware). It is also similar to a more contemporary Gucci techno canvas nylon, and the lining used with this is a plain nylon lining with woven GUCCI in parts).

I think the problem with this material is that it tends to accumulate dirt or get an uneven shiny quality on parts where they get the most stain or wear (think of badly ironing a polyester pair of trousers). Other than that, it is my go-to material after coated monogram canvas for unpredictable weather.


Lastly, Gucci has also used a plain, heavy cotton canvas on some of its bags. It is tough and almost indestructible. You see this material used with all types of bags. To compensate and contrast from the plain exterior, Gucci usually uses a G print lining to it. It is like business on the outside and party on the inside.

Now, you are already familiar with common Gucci materials (mostly non-leather except for the Guccissima leather).

I will not delay an important part of this “Ultimate Guide on How to Tell If A Gucci Bag is Real (or Fake)?” series, and go straight away where the fakes are easily weeded out: the Gucci bag serial number check.

To all those who are celebrating the LUNAR NEW YEA